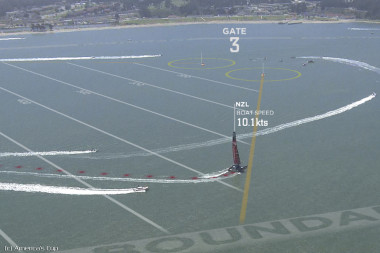 The five nominations come on the heels of a previous Emmy Award for Outstanding Technical Achievement for AC LiveLive.

“When we started planning for the 34th America’s Cup in 2010, one of the initial priorities was to create an exciting television experience for viewers,” said Stan Honey, Director of Technology for the America’s Cup.

The America’s Cup Official App, for iOS and Android, was nominated in the Outstanding New Approaches – Sports Event Coverage category. The Official App allowed users to follow the racing live via video, race animation, or text updates and users could select from several audio streams, including commentary, or on-board audio from each of the competing teams. Users could also post comments, chat and interact with event media and officials.

AC LiveLine, the groundbreaking graphics technology that allows for information to be embedded in the broadcast, previously won an Emmy Award for Outstanding Technical Achievement. This time, AC LiveLine is nominated in the same category for a new feature that showed the flow of wind across the giant wingsails that powered the America’s Cup boats at speeds of up to 50 mph, adding another dimension of information for viewers to aid in understanding the race tactics.

The 35th Sports Emmy Awards will take place on May 6th in New York City.

America’s Cup, ACEA: no a New York in vista della Summer of Sailing

ISAF Rolex World Sailor of the Year, si iniziano a raccogliere i voti