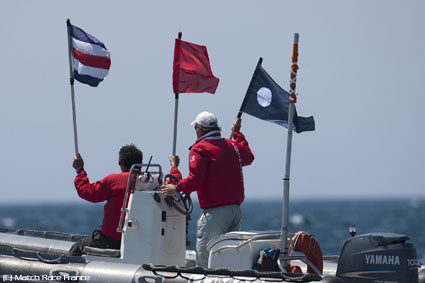 After a slow start, the young Australian is now in clinical form having only lost four from 1 matches. A win against Pierre-Antoine Morvan in the final flight of the Qualifiers – in which Ian Williams was knocked out – gave Mirsky first pick for the Quarter-Final draw. Marinho had been racing well but was an obvious target after Qualifying in eighth position.

In the first match Marinho crossed ahead of Mirsky and forced The Wave Muscat to the right however it was short lived as Mirsky fought back to force the Portugese to tack out to the left and relinquish the lead. It was textbook match racing from Mirsky and he never looked back, taking the next two races in comprehensive style.

In reflection, Mirsky said: “The Quarter-Finals went to plan with a 3-0 win. It wasn’t an easy one though. Alvaro was always on our tail but we had a little edge with our tacking and boat speed.”

Looking ahead to the Semi-Finals where he is level at 1-1 with Bertrand Pace, Mirsky added, “It’s never easy to pick a Semi-Final opponent – we felt Bertrand might be a little too old and we’re trying to maximise the age difference. We don’t know yet.”

As for Pace, he has his own ideas: “The racing today was tight but really good. I’m happy even though we made a few strategic mistakes. Tomorrow we have two or three matches for the Semi-Finals and as for Mirsky, he could be my son. At 50, I’m happy to still beat the younger teams.”

If Mirsky’s Quarter-Final pick was a ‘natural’ one, some may have wondered why Damien Iehl opted for Peter Gilmour who, although not in his best form here, has a 100% win rate against the Frenchman from their last nine matches. Iehl clearly fancied the home advantage and he was right to.

The debut Tour Card Holder sailed the perfect first race to go one up however it was the second race when the drama arrived. As they approached the downwind mark they collided, Iehl, on starboard, smashing his bowsprit into the port quarter of Gilmour’s boat as Gilmour gybed to port. The race was Iehl’s to lose after the umpires awarded Gilmour a double yellow flag judging that Iehl was overlapped outside the 2 length zone around the mark and therefore had the right to force Gilmour away. The second yellow was awarded as Gilmour forced Iehl to gybe and took the inside berth and the lead. Gilmour disagreed: “It was a difficult call for the umpires but a double penalty was a bit harsh.”

Gilmour pulled one back in the next race to bring the scoreline to 2-1 which gave him encouragement, saying: “If you can win your last race you’re still in it.” Unfortunately, Iehl was in no mood to drop his form now and took the final race to book his Semi-Final spot in style.

Each Semi-Finalist must surely have half an eye on the ever-impressive Radich. The ease with which he dealt with Bruni team in the Quarter-Finals was every bit equal to Mirsky’s skill. Bruni had no option but to draw Radich and his face showed it, commenting, “If I had the choice, I wouldn’t have faced him. We’ve lost three times in the Quarter-Finals stage to him [Radich].”

In a pre-season interview Radich said that he replaces his affable nature with an aggressive edge when racing and it showed against Bruni. The pre-start was full of animated appeals as both teams looked to command the left. It’s been the favoured side all week and Radich showed why – taking the left, he gained a commanding lead with great boat speed and as he approached M3 he had opened up an unassailable 7 boat length lead.

Radich sensed this match was for the taking, knowing too that Bruni is far more at home match racing in bigger boats than the J-80s. Radich went for it and never succumbed the lead in the next two matches subjecting Bruni to a defeat which he found hard to swallow: “I made too many basic mistakes in the start. What’s most disappointing is the fact our previous two matches have been tight but here, in light winds, they won easily, all in the pre-start really.”

Reflecting on his team’s performance, Radich said, “My team has lifted their game since the start [of Match Race France]. Our pre-starts are improving and I’m really happy with the team set up.”

Radich drew and, like Mirsky versus Pace, is delicately poised at 1-1 with Damien Iehl. Looking ahead, Radich said: “Racing in the Semi-Final is great for us. Damien is a very good sailor and very used to this boat. He has the ability to beat us as they have the skill and speed however in terms of match racing, I’m confident with my team and strategy.”

Teeing up a great climax to their Semi-Final, Iehl responded, “We’re happy with the way we performed against Peter [Gilmour]. It’s been a long day and I lost a bit of energy which showed in the first Semi-Final race. We re-grouped though and played the shifts well. Jesper and his crew are good sailors and won’t let anything go but neither will we.”