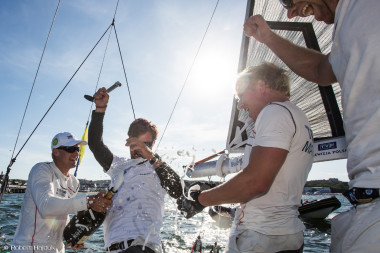 “It’s just fantastic to win here,” said a jubilant Sehested. “if you had asked me a week ago if I would get to the Semi Finals, I would have said it was unlikely, so we are thrilled to go all the way and I’d like to thank my team for all their excellent work.”

The Sopot win for Sehested marks a long awaited return to match racing for the 26 year old Dane who, for the last nine months, has been taking part in the 2014/2015 Volvo Ocean Race as helmsman for Danish Team Vestas Wind. Sehested was unable to compete in the opening World Championship stages of the 2015 Tour in Long Beach, CA, Germany and Sweden however was determined to return his Trefor Match Racing Ream to the Tour as soon as his Volvo duties were over.

The team will now focus on the next World Championship Event at the Argo Group Gold Cup in Hamilton, Bermuda in October.