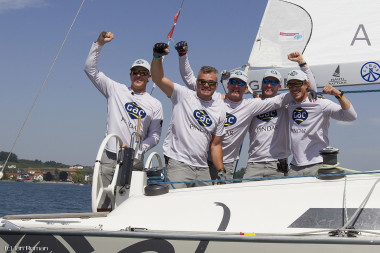 Although he holds a small points advantage at the half way stage of the 2015 Tour season, the British skipper of GAC Pindar knows there are plenty of teams looking to steal his thunder, not least arch-rival Taylor Canfield and US One, the Tour champions of 2013.

“We’re going to have to be on our toes in Sopot,” says Williams, recalling the tricky conditions on Poland’s Baltic coast line last summer when temperatures hit 30 degrees. “We had four light air days then it all changed for the finals with some big breeze. Hopefully this year we’ll be ready for whatever gets thrown our way.”

The event takes place in 34ft Danish-built Diamant 3000 keelboats, an IOR-type design from the early 1990’s with long overhangs, a relatively small cockpit and running backstays. One of the five-time World Champion’s strengths is getting to grips with whatever boat he and his well-drilled crew are given. “You have to be able to adapt quickly and keep on learning throughout the regatta,” says Williams, who has made the podium at all three of the events that he has competed at this year, including a win at the Royal Southern Match Cup.

One of the big differences between the WMRT points this year compared with previous seasons is that there are three levels of points up for grabs, as Tour Director Craig Mitchell explains: “The season culminates with the Monsoon Cup in Malaysia, which is worth 1.5 times as much as any of the other five World Championship Events. Also, the Monsoon Cup is non-discardable, and each skipper counts their four best World Championship Event scores – including Malaysia – towards their final tally. However for the first time there are also 11 other World Tour Events which count for fewer points but can still contribute to your final tally. This really opens up the World Championship to other skippers further down the ISAF World Rankings, and should keep things more open going into the finale in Malaysia.”

Among those who have taken advantage of the wider selection of events are Denmark’s Joachim Aschenbrenner currently in 5th overall, and New Zealand’s Reuben Corbett whose four solid regatta finishes put him in 4th overall, and just 2 points behind the experienced crews of Canfield and Björn Hansen who are tied for 2nd overall. Although now in his late 40s, the Swedish skipper won his fifth title on home waters after sweeping aside Williams 2-0 in the final of the Stena Match Cup Sweden.

Corbett said he wasn’t thinking too much about the big personalities that he’ll be up against. “To be honest we aren’t eyeing up any particular teams to beat. Given its our first year on the World Match Racing Tour we are just focusing on our own roles and what we can do to improve. We find it’s better to focus on the processes within our roles rather than worry about results. If we focus on the process the results will take care of themselves. We are satisfied so far with our debut season and our overall placing, but we certainly wont be sitting back on our laurels for the remainder of the season.”

Two qualifying events have also taken place in the build-up to Energa Sopot Match Race, with two Australian skippers making it through after Matt Jerwood won the Szczecin Match Race and 49er Olympic campaigner David Gilmour won the Dziwnow Match Race. David will also find himself up against younger brother Sam Gilmour, the first time the siblings will have raced each other on the WMRT, which their father Peter won four times before retiring from competition a few years ago.

This year will be the 12th edition of Energa Sopot Match Race, taking place on the Baltic in the Polish holiday resort close to Gdansk. As a nation Poland is one of the most prolific internationally when it comes to match racing with the annual Polish Match Tour comprising five or six events annually.

Energa Sopot Match Race organiser, Przemyslaw Tarnacki, is one of Poland’s top match racers and is competing at the event, which is centred around the town’s giant 500-metre long Molo Pier, the longest wooden pier in Europe. In the height of summer the pier attracts up to 20,000 visitors per day, making for big spectator audiences.

As the 2002 ISAF World Champion and former America’s Cup helmsman Karol Jablonski describes it: “Sopot is one of the best sailing stadiums in the world and all of the racing is run close to the pier, so the spectators have a really close view of the action that is going on on the water. It is very, very crowded in the summer as there are a lot of beaches, plenty of good hotels and restaurants. Pro sailors like Francesco de Angelis and Torben Grael who have raced in Sopot say they’ve never forgotten those events for the great sailing on the water, great parties, great food, great atmosphere and great looking girls!”

Practice sessions for Energa Sopot Match Race run on Tuesday 28 July with Qualifying on 29 and 30 July. Knockouts start on 31 July with the Final schedule for 1400 on 1 August.

Stay up to date with the event as we bring live race action via Twitter on @wmrt_liverace and regular updates on @worldmrt from Sopot. Follow us on facebook.com/worldmatchracingtour to get the latest news, event updates, behind the scenes and information of Energa Sopot Match Race.