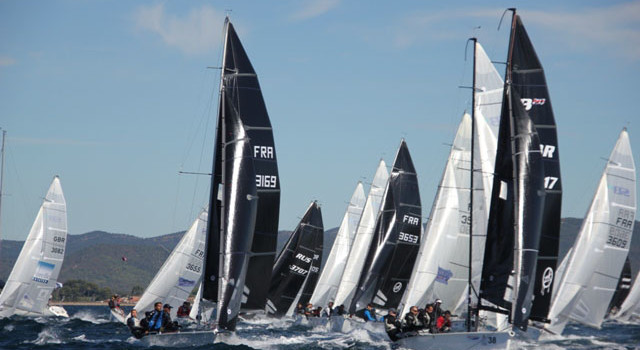 sb207 sb20 world championship5
Another fabulous day of racing was enjoyed by the 90 entrants at the Audi SB20 World Championships 2013 in the Baie des Iles d’... 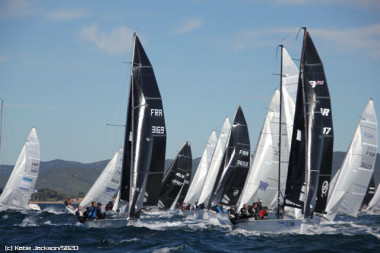 Hyeres – Another fabulous day of racing was enjoyed by the 90 entrants at the Audi SB20 World Championships 2013 in the Baie des Iles d’ Or, Hyeres. Today produced three different race winners in conditions that started off gentle and finished up in a “full foam up” as wind conditions climbed from five knots up into the mid twenties.

The first race was lead by Sebastien Col (FRA) from start to finish. On each leg Col was able to extend his lead, delivering a compelling performance to take the first race win of the day. Vladimir Prosikhin (RUS) had a somewhat different experience of the race. After rounding the first windward mark in 88th position, there were just two boats behind him, Prosikhin and his crew managed to pull their way back to finish eighth. This was a similar story for Roger Hudson (RSA) and his Race Ahead crew who rounded in 82nd position and managed a recovery of seventy two places, finishing tenth.

The Race Committee raised the AP while they reset the course, shortening the beat to 1.2 nautical miles with a bearing of 275º. By the time the second race was under way, after a couple of SB20-style general recalls were dealt with, the wind had freshened providing fantastic conditions for the fleet. Thomas Rouxel (FRA) sailed a strong first leg, and found himself in a competitive dual with Vladimir Prosikhin. Rouxel and Prosikhin played cat and mouse with each other and switched positions at each of the mark rounding’s of the race, but it was Rouxel that emerged the winner. When asked about his day on the water, Prosikhin grinned, “I am so happy, today we have a 8,2,5. I have a good feeling for this class, but my crew do not stop quarrelling, we are like three Hyenas in a boat! It’s the biggest fleet I have ever sailed in, it’s serious fun.”

For the third race, the wind had reached its peak and the fleet were set course type two; a standard two lap windward leeward with the addition of a third beat and a finish at the top of the race course. Rodion Luka (UKR) looked set to add another race win to his Championship tally, but Roger Hudson had other ideas. After a strong start and a good first beat Hudson had rounded the windward mark second to Luka. But it was downwind where the Race Ahead team were able to reel Luka in to take control of the final race. Luka was then shut out at the second windward mark rounding by Col and was knocked into third position, from which he did not recover. Asenathi Jim, helm of Race Ahead explained, “We crossed Rodion downwind where we found some good pressure, we soaked and that was it, we were ahead.” Hudson added, “We’ve had a few knocks this week, but today was a great day and we were able to cash in during races two and three.” When asked if they were performing well due to the stronger wind, Hudson grinned, “Of course we are, we’re from Cape Town!”

Nine races are now complete at the Audi SB20 World Championships. Craig Burlton has a comfortable over night lead with 35 points in first place, Hudson is second with 52 points and Luka lies third with 59 points. When one more race is complete the second and final discard will be applied to the overall results. Burlton will certainly be looking to focus on his consistent performance while Hudson and Luka will be on the attack from the get go on the final day of racing. As predicted by Luka earlier in the Championship, the result is bound to go down to the wire.