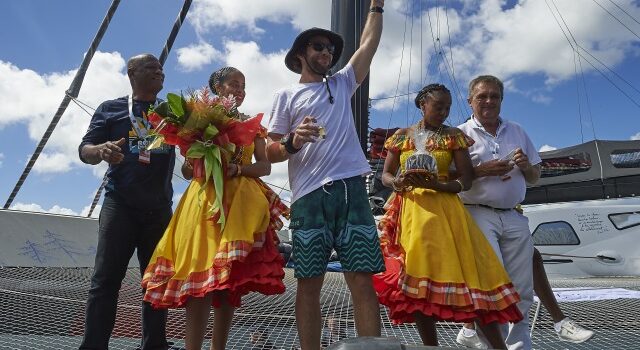 From fourth in Class40 in 2018, it is something of a step up for the 34-year-old skipper from La Rochelle to this famous Ultim which started life as Olivier de Kersauson’s Geronimo but which was largely remodeled to become Sodebo on which Thomas Coville smashed the solo round the world record in 2016.

Mieux was the only arrival into Guadeloupe today on the eve of an almost unprecedented rush of finishers which is likely to start tomorrow, Sunday, when the first OCEAN FIFTYs are due in the morning local time. Armel Le Cléac’h is due in the afternoon on the Maxi Banque Populaire XI while Monday early morning will see the start of a swift succession of IMOCAs.

In the OCEAN FIFTY class there is an engaging duel between the youngest skipper in the class, 28-year-old ex mini sailor Quentin Vlamynck on Arkema who is on his first solo multihull transatlantic, who is trying to cover the 2014 Route du Rhum Multi 50 class winner Erwan Le Roux, the 47 year old skipper of Koesio, in the final miles of his fifth Route du Rhum.

Vlamynck, who has led since the Azores, has just over 28 miles in hand and 150 miles to cover to the northern tip of Guadeloupe this Saturday afternoon.

The IMOCA duel is as hot as it ever has been, as leader Thomas Ruyant (LinkedOUT) has maintained a steady 2- mile margin over Charlie Dalin (Apivia) since last night, the leading pair trading gybes to get down to the long layline to Guadeloupe. Ruyant is not short of Transatlantic race winning experience having one year ago triumphed on the Transat Jacques Vabre into Martinique, won the AG2R into Saint Barths on the Figaro in 2018, the 2010 Route du Rhum in Class 40 and the 2009 Mini Transat to this same finish line. And so, while Dalin is unbeaten this season on Apivia, this is his first Route du Rhum-Destination Guadeloupe.

Germany’s Boris Herrmann has had to revert to ‘delivery’ mode – now racing with his foils retracted on his brand new Malizia-Seaexplorer after bolts in the foil casing on both sides have failed or bent.

“It is a little bit shit because I had put in so much effort to get this boat as good as possible and it is not where I want to be right now. I cannot deny it is making me a bit down for sure. I try to distract myself, but I tell myself the objective is to finish the race so qualify for the Vendée Globe and I seem to be achieving that. So, it is good. But my emotions are a little bit broken just now,”said the German skipper, who was fifth on the last Vendée Globe and one of the first to announce he would build a new boat for the 2024 race.

The IMOCA battle is really the first skirmish for many of the newly launched boats and there are a few conclusions to be drawn so far. Kevin Escoffier’s choice to take on and complete a boat which was already in build is proving wise as he is in fourth. Not many observers gave Paul Meilhat, the 2018 IMOCA winner, much of a chance of finishing given how new his Biotherm is, but he is absolutely in the match in fifth.

But certainly, the top half of the IMOCA fleet, at least, will be observing the Class40 performance of Yoann Richomme (Paprec-Arkea), and if they had not already marked him out as a Vendée Globe podium contender, the way he is sailing away from the fleet – even after a four-hour penalty on day 1 – is another reminder of what Richomme is capable of.

This morning Richomme said, “I feel at ease with my boat. We’re gliding along and it feels very pleasant. The weather is more favourable than for my rivals. I’m gaining miles, but we know there will never be enough. Now, it’s straight on. I’m starting to think about the finish, but the voyage around Guadeloupe can always upset things.”

Just less than 100 miles behind, Italy’s second placed Ambrogio Beccaria (Allegrande-Pirelli) is the fastest in the fleet this afternoon in the good downwind conditions. And while the 31-year-old winner of the 2020 Mini Transat clearly has a very fast new, all Italian Class40, his video today also showed that his consumption of quantities of homemade pasta are also helping his pursuit of the runaway Richomme.