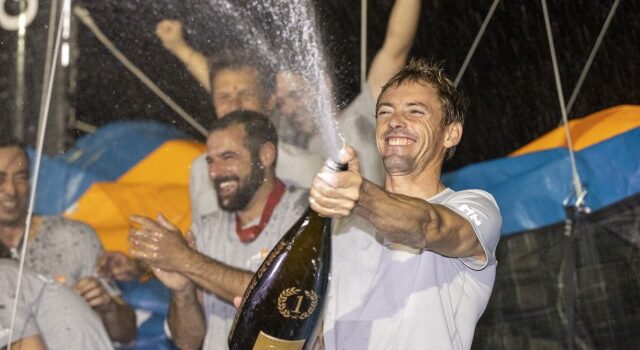 Thomas Ruyant, solo skipper of LinkedOut, was unofficially crowned ‘King of the Transats’ when he won the 38 boat IMOCA class on the 12th...

Point-A-Pitre – Thomas Ruyant, solo skipper of LinkedOut, was unofficially crowned ‘King of the Transats’ when he won the 38 boat IMOCA class on the 12th Route du Rhum-Destination Guadeloupe.

Hollow eyed, wobbly legged and exhausted this morning after setting an infernal, unbeatable pace especially over the last three days and nights of the 3542 nautical miles course from Saint Malo to Pointe-à-PItre, Ruyant received universal acclaim from his rivals who finished in his wake.

Ruyant set a new course record of 11d 17h 36m 25secs, 11hrs 02min 30secs quicker than François Gabart in 2014. He adds what he today called ‘the biggest win of my career; to a fistful of transatlantic successes now adding to last year’s two handed Transat Jacques Vabre which he won with Morgan Lagravière on a similar course from Le Havre to Martinique, and his solo Route du Rhum win in Class40 in 2010. But the 41 year old skipper from Dunkirk, who us a very rare ‘nordist’ in a solo racing world in which most top sailors are Breton, has also won the Mini Transat in 2009 and two Figaro Transatlantics.

A late starter to offshore and ocean racing Ruyant, who has the wiry build of a jockey and sails with an extraordinay instensity and focus, admitted he pushed himself to the limit, stepping up to a new level to overhaul leader Charlie Dalin on Friday morning, holding off the pre-race favourite on Apivia,  the clean sweep of all three IMOCA solo titles of 2022.

Emerging at the top of the biggest and most competitive IMOCA fleet ever mustered for the Route du Rhum Ruyant finished 2 hours 1 minute and 46 seconds ahead of Dalin, 3hrs 24mins 30secs ahead of third placed Jérémie Beyou (Charal 2) and 5hrs 54 mins 49secs before Kevin Escoffier (Holcim-PRB).

Audible above the background singing of a few partisan supporters who had travelled to Gaudeloupe from Dunkirk and Lille, Ruyant said,“In the end I crushed Charlie through my sheer desire and commitment even if I know that he also puts in a lot. I did not make any mistakes on my routing. I had an overall weather strategy but also there was a lot of cloudy activity in these trade winds, with a lot of squalls. You had to use them which I managed to do well. That took inspiration and luck. You also need success, but you have to push hard to get it.”

Ruyant enthused, “This second part of the race was like a dream, it was magical. When I pass in front of Charlie, I feel that he puts on a big layer and suddenly, I put on an even bigger one. Frankly, I’m happy to finish because it’s not a pace you can keep up in a Vendée Globe, it’s a real sprint.”

The downwind speed and power of his highly optimised Verdier and associates design proved crucial in the Tradewinds just as it did on last year’s Transat Jacques Vabre, when he and Lagravière also proved dominant on the final 1300 miles. Dalin recovered to within five miles of Ruyant last night but two squalls proved decisive and LinkedOut was gone.

“He got two squalls this morning and got away. I had been looking forward to a duel around the island. I thought he might get stuck but everything worked out for him. This was the final race aboard this boat for me. I completed all of the races. I had hoped for a bit better than second place.” Said Dalin who, though winning all three solo races this season, has been runner up on the Vendée Globe, the Transat Jacques Vabre and now he Route du Rhum.

“I find it hard not to get first place. In the past I would have been more stressed but I raced this as if it was a Figaro. I still love this sport. Sailing downwind in the trade winds with the boat flying along is fantastic; I’m lucky to have a job like this and a boat like this.”

In third Beyou was also totally spent as he stepped ashore to hug Ruyant and pay tribute to the intensity of his attack. Racing his brand new Sam Manuard designed Charal 2, Beyou acknowledged the extra stress and time required to find the perfect settings and modulate his attack in the big conditions, and to learn the limits of his powerful scow without breaking it. It is a huge tribute to the teams of Charal and Escoffier’s Holcim-PRB that they have succeeded in getting their new boats to a high level so quickly, when new boats rarely finish this often brutal race.

Beyou pointed out, “The trade winds were so unstable. You can’t eat, sleep or do anything on the boat. Thomas was so resolute, so driven. I couldn’t find the speed and for thirty hours I wasn’t so good even though I was hard at it all the time.”

“I didn’t know where I was with my boat before the start.” Beyou said, “ I don’t think we can push much harder than we did, yesterday in particular. It was a real competition. I wasn’t good for a day or two and Thomas was hard on it, relentlessly. Without that we would have been neck and neck. Thomas was just that notch above us. The boat is new and I hadn’t got used to all the gear. On the old boat, everything came naturally. We were looking for speed and that means a more violent boat. Eleven days of that is hard. She’s a new boat so you try to be reasonable, but I could not resist at times. You think twice about pushing hard in 35 knots in a new boat.”

Also highlighting the intensity and relentlessness of the race Escoffier was pleased with fourth on his new boat, especially considering he has not raced solo since his boat sank during the last Vendée Globe, “It was tough. What a pace. I’m very pleased, even though I’m very competitive. Yesterday I was a bit disappointed. The boat was launched in May, so putting things into perspective… I know more about the boat now. It is well built. I hadn’t sailed solo for a while and last time was in the VG. So this allowed me to get back in the game. If this had been my main goal, I’d be disappointed. In the Imoca class, there are some great boats and people working hard. I felt tired and had hallucinations. The boat is demanding and the competition so tough. I’m happy to see that with a new boat and not having raced solo for two years, I’m up there, so it is all very positive.”