Star Sailor League, the first edition of the SSL Lake Grand Slam will be held in Grandson

sailing3991 star136 star sailor league16
Star Sailor League is happy to announce the first edition of the SSL Lake Grand Slam that will be held in Grandson on the... 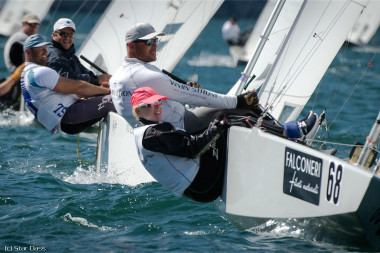 Lausanne – Star Sailor League is happy to announce the first edition of the SSL Lake Grand Slam that will be held in Grandson on the Neuchatel Lake, CH, in September 2015.

It’s very important to SSL as it represents the first step towards the creation of a World Series of Grand Slams that will test sailors in different racing conditions, in order for them to gain points for the Finals in Bahamas in December.

The event will be held in Grandson, lake de Neuchatel, from 8th to 12th of September. The race course on the lake depends on three main winds – Bise from the North, Joran from North west and Vent from South West – and will be set according to them with the finish line being incredibly close to the dock, less than 100mt.

A few top sailors have already confirmed their attendance, six months before the opening of the event. Among them Torben Grael, 2x Olympic Gold Medalist, 2x Star World Champions, he is the most eclectic winning sailor of all time. Mark Reynolds, 2x Olympic Gold Medalist, 2x World Champions and ISCYRA Seretary, he’s been sailing on Star since he was 4 years old with his father, crew for Star Class and America’s Cup legend Dennis Conner, who will also be attend the SSL Lake Grand Slam. Mateusz Kusznierewicz, best ever Polish sailor, who is a Gold and Bronze Olympic Medalist the Finn Class and World Champion in the Star Class in 2008.

To know more about the event you can check the official SSL Lake Grand Slam website, http://swissopen.starsailors.com where you can also find images and videos from last December SSL Finals in Bahamas and all the information about our sailors.

ISAF Sailing World Cup Final, the event is on