America’s Cup, six line up to battle for the Cup

America's Cup1424 coppa america1249 san francisco145
“It’s exciting to look at the roster of teams who are lining up against us,” said Jimmy Spithill, the skipper of Oracle Team USA... 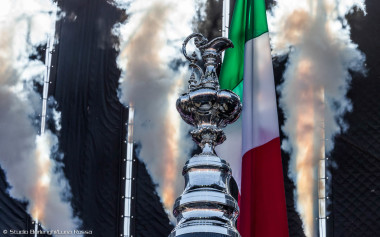 San Francisco – “It’s exciting to look at the roster of teams who are lining up against us,” said Jimmy Spithill, the skipper of Oracle Team USA, the winner of the last two America’s Cup matches. “We’re facing five strong challengers who have a lot of resources, talent and experience. But our team is very competitive. We love challenges – the bigger, the better. It’s very easy to get motivated when you see what we’re going to be facing.”

The 35th America’s Cup begins in 2015 and 2016 with the America’s Cup World Series, raced in venues around the world. This feeds into the main events in 2017, which will narrow the field to just two: the top challenger and the defender, Oracle Team USA, who will then face each other in the America’s Cup Match.

Teams will be given the opportunity to host America’s Cup World Series events at a venue of their choosing, while the final venue for the 35th America’s Cup will be either Bermuda or San Diego, with the selection to be made before the end of the year.

Under the rules of the event, late entries may be accepted at the discretion of the America’s Cup organizers.

Quotes from the challenging teams
Iain Percy, Artemis Racing: “We are not only in this competition to win the 35th America’s Cup, but to dominate the America’s Cup arena for the next decade. I’m also passionate that Artemis Racing is about more than simply winning; it’s about producing a legacy and winning in a certain way.”

Ben Ainslie, Ben Ainslie Racing: “We are delighted that Royal Yacht Squadron Racing’s challenge for the 35th America’s Cup has been officially accepted. The America’s Cup originates from the Squadron and it is our goal to return the Cup to where it belongs.”

Dean Barker, Emirates Team New Zealand: “New Zealand has a long and proud history in the America’s Cup. We see some formidable opposition taking shape in the 35th America’s Cup and we have no illusions about the job ahead. We have been working quietly behind the scenes towards this day almost since the last day of the 34th America’s Cup. Now the real work begins.”

Max Sirena, Luna Rossa Challenge: “This is Luna Rossa’s fifth challenge to the America’s Cup, an historic record. Not only does it underline the attachment of our team to the America’s Cup, but it also shows our determination to bring the Cup to Italy. This edition will be very competitive and our team has already been preparing for several months now in view of a challenge that promises to be spectacular and exciting right from its preliminary events, the America’s Cup World Series, that will take place next year.”

Franck Cammas, Team France: “Team France is very proud to be a challenger for the 35th America’s Cup. We are taking the first step of a journey that we know will be very difficult. With Olivier de Kersauson, Michel Desjoyeaux and our team, we are determined to represent France at the highest level from a sporting and technological point of view. I thank all of our partners and supporters, as without you, we would not even see the beginning of our journey, much less the road ahead.”

The teams for the 35th America’s Cup will be introduced at a press conference in London, England on September 9.