isaf rolex world sailors of the year4 sailing3991 usaf21
ISAF and Rolex are delighted to announce that the winners of the 2014 ISAF Rolex World Sailor of the Year Awards are... 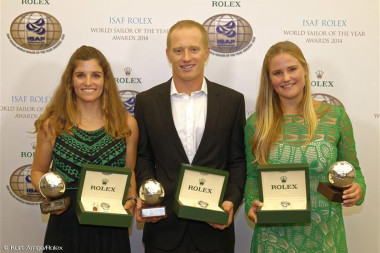 Palma de Mallorca – ISAF and Rolex are delighted to announce that the winners of the 2014 ISAF Rolex World Sailor of the Year Awards are:

Australian James Spithill was nominated for leading Oracle Team USA to one of the greatest comebacks in all sporting history. Trailing Emirates Team New Zealand 8-1 in a first to nine quest for one of yachting’s greatest prizes, the America’s Cup, skipper Spithill inspired a comeback of epic proportion with a faultless “down but not out” approach. Levelling the series at 8 apiece his team was victorious in the winner takes all final race; Spithill’s second triumph in the 162-year old contest.

35 year-old Spithill is the third Australian to win the ISAF Rolex World Sailor of the Year Award, following Mat Belcher (2013) and Tom Slingsby (2010).

Quote James Spithill: “With such a fantastic group of nominees it’s quite humbling to be included in the same group. I feel a little awkward winning this award. It seems it is an individual award and in my case it could not be further from the truth. What happened on San Francisco Bay was an incredible team effort. I was just a small piece. I would like to accept the award on behalf of a great group of people, Oracle Team USA.”

Despite their young age (both are 23) this year’s nomination of Brazilians Martine Grael and Kahena Kunze was no surprise. They have been leading lights in the 49erFX class all season, regularly topping the podium in ISAF Sailing World Cup regattas and holding the #1 spot in the ISAF World Sailing Rankings. The pair also exhibit a never say die characteristic, proven by their recent victory at the 2014 ISAF Sailing World Championships. Playing catch up throughout the series in the pursuit of their first world title, Grael and Kunze kept going to the very end, finally overtaking the championship leaders on the penultimate upwind leg of the final race.

Grael and Kunze mark the fourth time Brazil has tasted success at the ISAF Rolex World Sailor of the Year Awards following Torben Grael (the father of Martine – 2009), and Robert Scheidt (2001 & 2004)

Quote Martine Grael: “This prize is the recognition for a marvellous year. We are very happy and it’s really hard for me to find the words to express our feelings.”

Quote Kahena Kunze: “We’re very happy. Just by being part of this ceremony, surrounded by all these people, it would have made our night. This prize means a lot, and we cannot take the smile off our faces.”

The 2014 ISAF Rolex World Sailor of the Year Awards were held at the Pueblo Español in Palma de Mallorca, Spain.