melges 24681 sailing3991 san francisco145 sperry top-sider melges 24 world championship7
Professional and amateur teams from across the United States and around the world are converging on San Francisco Bay for the Sperry Top-Sider Melges... 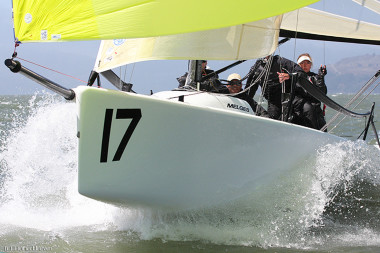 San Francisco – Professional and amateur teams from across the United States and around the world are converging on San Francisco Bay for the Sperry Top-Sider Melges 24 World Championship 2013, which takes place from September 30 to October 5 at the San Francisco Yacht Club in Belvedere, California.

Melges 24 World Championships always deliver a compelling mix of high performance sailing and close tactical racing and the renowned breezy conditions of San Francisco Bay mean this latest edition is set to be a humdinger. As ever at Melges 24 international events, the entry list is a heady mix of top professional and pro/am crews and talented ‘Corinthian’ (no professional sailors allowed) teams.

Amongst those Corinthian competitors is Australian Kevin Nixon, whose ACCRU crew are already in San Francisco and have been training hard to familiarise themselves with the local conditions. Nixon, who has purchased a US boat for the event, says getting time on the water together has been important for his crew who haven’t sailed together since the Australian National Championship this January.

Nixon said he and his crew were excited to be part of the upcoming action. “We are a family team consisting of my wife Glenda, daughter Bonnie, son Daniel and niece Grace from New Zealand,” Nixon told us. “We started sailing socially and then got hooked on the racing and now we are keen to do events all over the world. We don’t sail together too often and that is why we have entered in the Corinthian Division.”

Nixon, who was delighted to arrive in California in time to catch some of the America’s Cup racing, said that racing in Melges 24s on San Francisco Bay had been on his ‘bucket list’ for some time and he expected the Corinthian competition to be as red hot as usual.

“To be able to see the America’s Cup is a plus, so we have already achieved a big part of the goal,” he said. “I am sure there will be a very high standard of competition. History in the Melges 24 shows that a Corinthian usually finishes in the top ten overall, so you would expect that to happen again or be very close.”

Nixon also hopes his crew’s expedition to the United States will help them prepare for the 2014 Melges 24 World Championship which takes place next year from January 26 – February 2 in beautiful Geelong, Australia.

Nixon said preparations for that event, the first time a Melges 24 World Championship has been hosted in the southern hemisphere, are going well and he had this to say to potential competitors still contemplating making the trip. “I would say come down to Geelong. The championship is pretty much ready to go. As far as the race track goes, it is fantastic with a little bit in it for everyone. Geelong sees a varied range of conditions and outside of the sailing it is a great tourist destination.”

Demonstrating the truly international nature of the Melges 24 class itself and the draw of the 2013 championship, two Chilean teams will be competing this year. One of them – Corinthian competitor Pablo Gallyas on Gallyas Marine – says he and his crew have been training hard with their local Melges 24 fleet most weekends recently, as well as individually spending time in other performance boats like 49ers and F18 catamarans to further sharpen up their high speed skills.

Like many other worlds competitors, Pablo will be using the Rolex Big Boat Series, which gets underway today and provides a warmup event for the worlds, to round off their pre-championship training. “We arrive in San Francisco on September 26 and will go directly to the Big Boat Series,” he told us. At 38 boats from a dozen nations, the Melges 24 fleet is by far the strongest racing in at Rolex Big Boat Series this year and the teams will be making the most of this final tune up opportunity.

Pablo, who will be racing at a Melges 24 world championship for the first time – and who will also be making the trip to Australia for the 2014 Championship – said that he was not sure what to expect other than that the level of competition would be high. “We also expect to have a great time flying in the strong San Francisco Bay winds!” he added. “Our team goal is to finish in the first half of the fleet.”

Unlike Pablo, Bermudan competitor Alec Cutler on Hedgehog is no stranger to the top end of the Melges 24 world championship fleet. The last time the worlds were held in the USA – 2011 at Corpus Christie, Texas, another windy venue – Cutler finished one place off the podium after being firmly in the hunt all regatta. Cutler’s crew have been on sparkling form this year and at another Sperry Top-Sider sponsored event, Charleston Race Week, they topped the leaderboard – an omen for great things this time perhaps?

The Sperry Top-Sider Melges 24 World Championship runs from 30 September to 5 October. Registration will take place on Monday 30 September and Tuesday 1 October. There will be practice racing on Tuesday 1 October and Championship Racing will run from Wednesday 2nd to Saturday 5th October. In addition many of the teams will be taking part in the Rolex Big Boat Series which will act as a warm up event for the worlds from 26-29 September.