discovery route17 dona bertarelli11 sailing3991 spindrift 227 yann guichard23
Making the most of a powerful trade wind, Spindrift 2 continues its Atlantic crossing at full speed. On a starboard tack throughout the day... 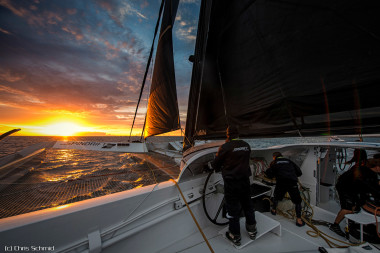 Atlantic Ocean – Making the most of a powerful trade wind, Spindrift 2 continues its Atlantic crossing at full speed. On a starboard tack throughout the day yesterday, the largest trimaran in the world – skippered by Dona Bertarelli and Yann Guichard – did a double jibe overnight to plunge into the stronger winds blowing from the east. The most delicate moment of the Discovery Route is coming up, with the transition zone to negotiate in approximately thirty hours, between the trade wind and the strong low-pressure system settling in along the North American coastline and to the Bahamas. The situation is being closely monitored by Richard Silvani ashore and the trio Guichard-Bertarelli-Israel on board the maxi multihull. From tonight they will have to apply their seamanship and regatta experience to manoeuvre a double gybe approaching the weaker wind zone in order to reach the strong north-easterly flow and finish the record attempt on a starboard tack.

“The problem is twofold,” explains Yann Guichard. “If we cross the low pressure area from the north, we will be out of the zone of light winds sooner, but for this, we will have to sail further north. If we cross it from the south, we will remain on the most direct route, but will have to negotiate the calm waters for longer”. The good news for the 14 men and one woman on board, is Spindrift 2’s lead – described as “interesting” – over the current record holder, Franck Cammas’ Maxi trimaran Groupama 3, racing in 2007 and at this point of the race, more than 330 miles in their wake. “Reason enough to take it calmly”, said Richard Silvani.

“Things are unfolding as we had expected from the outset at Cadiz”, Guichard said. “We will not take any risks. We will choose the latitude to attempt the passage in the next 5 or 6 hours. We should not lose more than 4 to 5 hours in the thalweg.“ Spindrift 2 can then make the most of the fine trade wind conditions for a good part of the day. “The sea has continued to improve and flatten, making Dona’s work easier”, says Yann.

Dona Bertarelli is really getting her bearings on her first Atlantic crossing. Her account is most revealing of the complexity of piloting the largest racing trimaran in the world. ”I managed to overcome the psychological barrier when I was able to successfully helm at 40 knots of speed. The difficulty is not so much the wind strength or the boat speed but the magnitude and direction of the waves that complicate the task and are still today a challenge for me. Keeping the boat consistently at high speed and in tune to the state of the sea requires technique, concentration and also physical strength. When conditions are very tough, I do not helm for more than 30 minutes at a time”. And she treated us to an eloquent postcard; “It is very hot inside. Everyone is suffering from the clammy humidity, and rest has become more difficult, while preparing meals has become a hard slog in a real sauna! I really picked up the pace, however demanding, sailing all the time above 30 knots. Loud noise is constant below deck, the sound of waves crashing on the hulls, the sheets rattling with each shock, the grinding of the boat…. but also on deck, with the wind, and life on board is sporty, with the boat constantly swinging about, racing down a wave to then to crash, pitch up again, leap out of the water … it’s moving all the time! Staying on your feet is a challenge. Having said that, the atmosphere is excellent, the focus is on the boat speed but there is also a friendly atmosphere and we all muck in. We are all enjoying ourselves; it is extraordinary to experience this record attempt on this boat, with this crew and with a challenge of this magnitude.”

Racing at full speed to break the Discovery Route record, Guichard, despite the significant lead gained from the first miles, is far from complacent. “There are still over 1500 miles to be covered and we must remain extremely focused and vigilant. The wind will ease and we are going to have to navigate, helm and trim with even greater precision to maintain the pace and speed if we want to beat the record.”

At 14:30hrs GMT this morning Spindrift has a 311.99 miles lead on the current record time.

Route of Discovery, Spindrift 2 in standby a Portimao
Add a comment