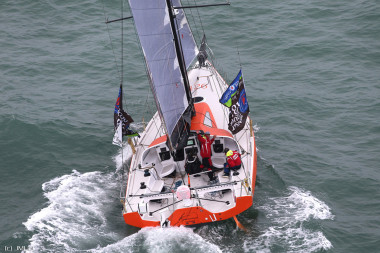 Biscay Bay – For a few hours in particular today the middle of the Bay of Biscay will be an unforgiving section of the 5450 miles race course for the Transat Jacques Vabre race from Le Havre to Itajaí, Brasil.

The Multi 50’s were bearing the brunt of the passage of a low pressure trough which was producing violent squalls and big, messy seas. In fact the IMOCA Open 60’s go slightly better in these conditions, while the two MOD70’s are well clear of the worst of the weather and making good speeds after Cape Finisterre and now off the Iberian peninsula.

The poor conditions will last until Sunday for the Multi50s and IMOCA Open 60s as this deep low pressure which has emanated from Newfoundland and is tracking quickly makes life very testing for the Multi50s especially. This is exacerbated by the wind shifts between SW and W with more than 30kts average and much more in the gusts, the crossed seas make it very bouncy and unpleasant for the multihulls.

The key balance just now is dealing with the worst of the weather whilst trying to escape south of Finisterre to get clear into the NE’ly Portuguese trade winds. The IMOCA Open 60s have been able to do a little better in the conditions than the Multi’s. Macif (Gabart and Desjoyeaux) have made a decent jump in the conditions to lead PRB (Riou and Le Cam) by more than 50 miles on the mid morning ranking. Cheminées Poujoulat have continued their comeback and were in third while the strategy of staying south for VNAM (De Brock and Boissières) has paid an initial dividend but they had yet to get west across the front.

Meantime the MOD70’s were in good shape this morning, dealing with some lighter airs off Cape Finisterre. And as the Azores high moves over the Iberian peninsula it will develop a good flow of NE’ly trade winds as of tomorrow, Sunday.