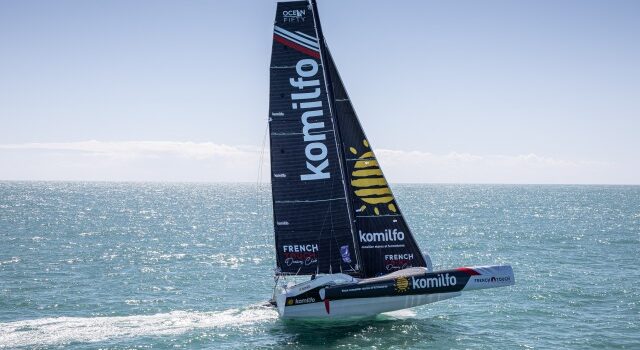 Route du Rhum89
The last 24 hours have been tough for the competitors in the twelfth Route du Rhum – Destination Guadeloupe, which started last Wednesday from...

Grenada – The last 24 hours have been tough for the competitors in the twelfth Route du Rhum – Destination Guadeloupe, which started last Wednesday from Saint-Malo in France. After a series of incidents yesterday evening involving Louis Burton (Bureau Vallée), Amélie Grassi (La Boulangère Bio) and Aurélien Ducroz (Crosscall) – who all dismasted – and Thibault Vauchel-Camus (Solidaires en Peloton-ARSEP) who capsized, other skippers have suffered misfortune today (Sunday).

In the Rhum Multi category, Brieuc Maisonneuve (CMA Île-de-France – 60000 Rebonds) was rescued by Jean-Pierre Dick (Notre Méditerranée-Ville de Nice) following the capsize of his catamaran. In the IMOCA class, Fabrice Amedeo (Nexans-Art & Fenêtres) discovered an ingress of water and is heading for Cascais (Portugal), while in the Class40, several competitors have also diverted. The race has been demanding and the warmth of the French West Indies and the finish line is something that must be earned.

The finish in Guadeloupe is some way off for the competitors still in the race. Considering the differences in speed between the boats that are taking part and the various incidents marking the early days of the transatlantic crossing, the Route du Rhum – Destination Guadeloupe fleet has logically stretched out.

The extremely fast Ultim 32/23 multihulls led by Charles Caudrelier (Maxi Edmond de Rothschild) and François Gabart (SVR Lazartigue), are getting close now to the trade winds and can hope to finish in Pointe-à-Pitre on Tuesday or Wednesday, according to Charles Caudrelier’s routers. The IMOCAs and Ocean Fifty boats can also look forward to speeding downwind relatively soon. As for the Class40 and Rhum Multi and Rhum Mono categories, an approaching active front that is currently on the minds of the skippers. For once, the IMOCAs, which perform particularly well with the wind on the beam, are in amongst the Ocean Fifty multihulls. Charlie Dalin (Apivia) is right behind Quentin Vlamynck, while Jérémie Beyou(Charal) and Thomas Ruyant (LinkedOut) are close astern of Erwan Le Roux. This happy mixture of boats is what makes the Route du Rhum – Destination Guadeloupe such a major event.

Ocean Fifty: tactical positioning
There is good news within the Ocean Fifty class this afternoon, as Thibaut Vauchel-Camusand his boat Solidaires en Peloton were rescued this morning by the Merida, French skipper Adrien Hardy’s rescue boat, while sailing conditions have improved considerably around the Azores.

It is now time for strategy to come into play with everyone working on their trajectory to get to the trade winds. Is Eric Péron (Komilfo) right to have positioned himself further east? Or is it going to work out better for those like Quentin Vlamynck (Arkema), Erwan Le Roux (Koesio) and Armel Tripon (Les P’tits Doudous) sailing close to Santa Maria in the Azores? The main goal is to avoid patches of light winds associated with the Azores high. There are still 700 miles, and around two days of sailing to go to reach the NE’ly winds allowing them to sail downwind across the Atlantic and for the moment, they have to avoid the traps in the Azores high.

IMOCA: “Chaotic seas and wild conditions”
The IMOCA fleet has been punished since the start last Wednesday and after Louis Burton(Bureau Vallée) was forced to retire yesterday after dismasting, there are now 35 IMOCAs in the race. Due to an ingress of water into his boat, Fabrice Amedeo (Nexans – Art & Fenêtres) is heading for Cascais, while Swiss sailor Oliver Heer (Oliver Heer Ocean Racing) is carrying out a pit stop in Port-la-Forêt, with Damien Seguin (Groupe Apicil) arriving back in his home port of Lorient. Charlie Dalin (Apivia) is still leading the fleet ahead of a small, compact group of chasing boats determined to challenge his supremacy. Today, the sailors are in an unstable air stream, requiring them to be particularly vigilant. They are all in a hurry to pick up winds that will allow them to sail downwind to Guadeloupe.

The violent front passing over yesterday was not the end of the difficult conditions for theskippers. All spoke today about tricky sailing in very variable, unsteady winds. Franco-German skipper Isabelle Joschke (MACSF) explained, “I’m in between two squalls with five to ten knots of wind and getting tossed around by the seas, which isn’t very pleasant at all. Ten minutes ago, I had 23 knots and in five minutes, it will get back up to that again. Throughout the night, the wind was up and down from fifteen to thirty knots, which meant I had to react quickly to avoid changing tack. At one point, the boat broached.”

The situation ahead will involve making strategic choices to get to the south of the Azores high and pick up the long-awaited trade winds. Italian skipper, Giancarlo Pedote (Prysmian Group) explained, “It’s starting to get very tiring sailing upwind all the time. There are gusts up to thirty knots, and then it drops off to twelve. I just had another gust and the boat shot away like a rocket. There is some sunshine, but then squalls and the wind is very unstable. We’re slamming a lot. I’m looking forward to getting to the High at some point and making our way south.”

At the front of the IMOCA fleet, Thomas Ruyant (LinkedOut) is sailing neck and neck with Jérémie Beyou, 2nd on the new Charal. Other skippers aboard new boats are also doing well, like Paul Meilhat (Biotherm), Kevin Escoffier (Holcim-PRB) and Maxime Sorel. We should also mention Swiss sailor, Justine Mettraux’s (Teamwork.net) fine performance, as she is currently in seventh place and first among the women skippers. Among the other international competitors, German skipper, Boris Hermann is 13th, Italy’s Giancarlo Pedote 16th, New Zealander, Conrad Colman 17th, Britain’s Pip Hare 24th, with her compatriot James Harayda28th and the Hungarian skipper, Szabolcs Weores is thirtieth.

Class40: a short truce this Sunday
The front that swept across the Class40 fleet yesterday is not something the skippers will quickly forget. The day began with the fleet reeling from the news of what was happening out on the water around them. The violent conditions – which led to the dismasting of Amélie Grassi (La Boulangère Bio) and Aurélien Ducroz (Crosscall) yesterday evening – did not spare anyone. Other racers have been forced to divert to head for port, like Mickael Mergui (Centrakor), Yves Courbon (Edigo-Univerre) and Henry Rupert (Eora), with the latter two having structural problems

Keni Piperol (Cap’tain Alternance) is inspecting his ingress of water in La Coruña, while Pierre Cazenave-Peré (Legallais) has problem with his rigging and is expected in the Galician port this evening. Croatian sailor Ivica Kostelic (ACI), who was there to resolve his autopilot problems, has now set sail again.

At the front of the fleet, with everyone progressing towards the SW, the intensity of the race is building. The three frontrunners, Xavier Macaire (Groupe SNEF), Yoann Richomme (Paprec Arkéa) and Corentin Douguet (Queguiner-Innoveo) were within 2.5 miles of each other early this afternoon, while we should note the fine trajectory taken by Matthieu Perraut (Inter Invest), Swiss sailor, Simon Koster (Banque du Léman), Ian Lipinski (Crédit Mutuel), and the two Italians, Ambrogio Beccaria (Allagrande – Pirelli) and Alberto Bona (IBSA).

The truce this Sunday will however be short lived, as another front is due to move in during the night.

Simon Koster (Banque du Léman) declared, “It’s really the Route du Rhum – Destination Guadeloupe. Heavy seas, wind, a skipper that is a bit worn out, a few odd jobs to do, but at least we are heading south. I think there is another low-pressure system quite some way south.  Inside the boat, it’s like a skating rink with a mixture of seawater and diesel that has leaked out.”

Rhum Multi and Mono: Rescue and the way out to the south
It was a difficult night for the Rhum category, with most of them passing a second front. This morning at around 0800hrs CET, the autopilot on Brieuc Maisonneuve’s CMA île de France – 60000 rebonds catamaran failed in a violent gust of wind causing the boat to bear away. The sailor was unable to do anything to prevent the boat from capsizing. The Race Directors asked Jean-Pierre Dick to change course and head for the area. He was able to recover Brieuc Maisonneuve and take him aboard. The two men are now heading towards the Azores and the team is organising an operation to recover the boat.

The competitors in the Rhum category will be facing another nasty period later today. The tropical low-pressure system ‘Nicole’, which looks particularly violent will rapidly move across the Atlantic generating 35 to 40 knot winds with gusts reaching 55 knots. This will cause very heavy seas with waves between 18 and 27 feet and cross seas. The only way out is to dive south towards the Azores.

Heading south as quickly as possible

In the Rhum Mono category, most of the competitors have gone for a southern route. These include Jean-Pierre Dick (notre Méditerranée – Ville de Nice), Catherine Chabaud (Formatives ESI Business School Pour Ocean As Common) and Willy Bissainte (Tradysion Gwadloup). Olivier Nemsguern (Elora), 4th in the category, talked today about the conditions. “I passed the front during the night. Conditions were impressive and I was rather scared after the repairs to my stay. Now I’m heading south as quickly as I can to avoid the next front which looks particularly violent.”

He is not the only one to have had problems. Arnaud Pennarun (Viabilis – Pen Duick III & ACH pour les enfants de Robert Debré) has had to do a lot of odd jobs aboard his boat, while Daniel Ecalard (SOS Pare-Brise +) has decided to head for Vigo (Spain) to repair his two autopilots.

In the Rhum Multi category, Gilles Buekenhout (Jess) is still in front ahead of Roland Jourdain and Marc Guillemot (Metarom MG5). The Belgian skipper was the fastest in the fleet today, sailing three knots faster than his rivals. After a second pit stop in La Coruña in Spain, Philippe Poupon (Flo), set off again this afternoon. Yesterday evening, Erwan Thiboumery, skipper of the Interaction trimaran informed the Race Directors them that he was having problems with his headsails. The genoa on the trimaran ripped and become stuck at the top of the mast, flying like a flag. Erwan Thiboumery, who has put his race on hold for the moment, is heading for Vigo (Spain).