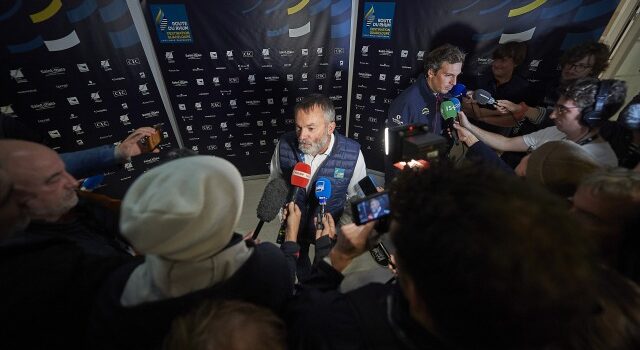 route di rhum1
Postponed from 1302hrs (local) today (Sunday) due to forecasted stormy winds and huge seas expected in the English Channel, the re-scheduled start for the...

Point-a-Pitre – Postponed from 1302hrs (local) today (Sunday) due to forecasted stormy winds and huge seas expected in the English Channel, the re-scheduled start for the 12th edition of the Route du Rhum-Destination Guadeloupe – the solo ocean race from Saint Malo to Guadeloupe – will now be on Wednesday 9th November at 1415hrs (local) with favourable weather forecast for the record 138 boat fleet.

Now, given the new start time, the skippers can plan ahead for the rescheduled start. At 1000hrs this morning (Sunday) at a press conference in Saint-Malo, the organiser OC Sport Pen Duick and the Race Director, Francis Le Goff officially announced that the 12th edition would start on Wednesday afternoon at 1415hrs. “At that point, the weather should be easier to deal with as there will be a 15 knot westerly wind,” explained Le Goff. “The situation will be favourable and allow the boats to make their way out of the English Channel. The forecasts seem very reliable with a probability of more than 90%. The start of the race should be much less hazardous than if the start had gone ahead on Sunday.”

The skippers taking part will attend a weather briefing on the day before the start. The 38 IMOCAs and eight Ocean Fifty boats will leave the docks in Saint-Malo on Tuesday afternoon (times to be announced). The Class40 and Rhum Mono and Rhum Multi categories will make their way through the locks on Wednesday morning. The arrangements will be similar to those in place on Friday for the Ultim 32/23 with stands in place allowing the public to watch the event.

As planned, today will be the final day that the Village will be open with closing time at 1700hrs. This will allow visitors to Saint-Malo to come and admire the boats still present in the docks before they race across the Atlantic.

The organisers made all the modifications to the arrangements in record time, allowing everyone to prolong the excitement leading up the start of the race, thanks to the support of those alongside the organiser, OC Sport Pen Duick, including the Guadeloupe Region, the City of Saint-Malo, the Brittany Region, the CIC bank, national authorities, volunteers from the Bay of Saint-Malo Sailing Club and everyone else involved.

Route du Rhum, and they’re off

Sailing and One Design, a full season for the IMOCA