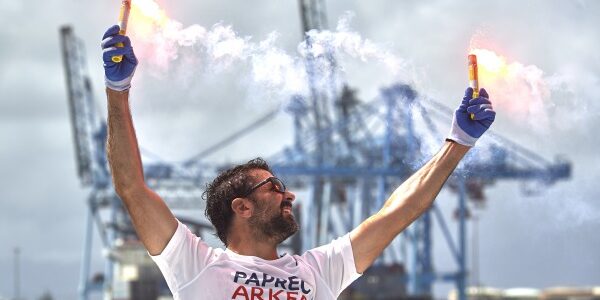 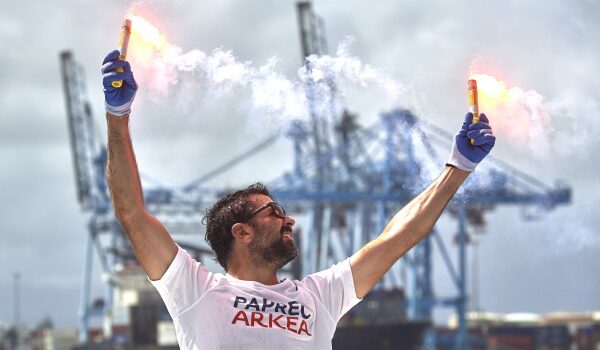 Point-A-Pitre – French skipper Yoann Richomme joined the very elite group of solo ocean racers to have twice won their class on the Route du Rhum-Destination Guadeloupe today, when he brought the new build Lombard Lift 40 V2 Paprec-Arkea through the finish line of the 12th edition this Wednesday afternoon at 16:23:40 UTC to win in the Class40 from a record entry of 55 boats.

Richomme repeats his 2018 Route du Rhum-Destination Guadeloupe title success in the class with a facsimile programme, launching his latest new boat in the same season as the race, optimising and making the boat reliable over a compressed period before going on to win comfortably.

Key differences this year are that the 39-year-old Southampton (UK) trained naval architect was called over the start line early off Saint-Malo on Sunday November 9th and had to take a four-hour mandatory penalty. Although he cleverly took it while the fleet were negotiating a spell of light airs and strong tides at Cape Fréhel – he later estimates his net loss was more like two and a half hours – he immediately dropped to 50th with a deficit of 19 miles on the leaders. But with his characteristic drive and smart, immaculate strategies, he pulled through the fleet and took the lead just before the Azores.

Richomme’s lead was up to 120 miles in the fast trade winds sailing which allowed him the luxury of a relatively serene passage around the west of the island of Basse Terre today.

With an elapsed time of 14d 03hrs 08mins 40s, Richomme breaks his own course record for the class by two days. His winning time in 2018 was 16 days, 03 hours, 22 minutes and 44 seconds. He also becomes the first skipper to win Class40 in successive years.

Richomme’s celebrations on the dock were also a repeat of last time, savouring the simultaneous moments of pleasure and relief with his arms aloft and his eyes lifted to the heavens. A true perfectionist in every sense and a master meteo strategist, even his arrival at the dock was – by chance – perfectly timed for the media deadlines at home in France.

“I’m really proud,” Richomme enthused, “There are so many ingredients necessary to win this race. I spent my time analysing the weather and we had some violent systems. I was afraid all the time that I would suffer a breakage. Even rounding Guadeloupe, I was afraid of that. It was a real challenge.”

“Of course I could have stayed home preparing my Imoca, but this was a challenge for me and the team. So I’m really pleased. It was hard to manage the race. I had to slow down the boat for the first time. It’s really hard and you have to give it all. Corentin with his electrical problems and Ambrogio at his age… Congratulations. I’m proud of this result.”

His approach, as is usually the case, is self contained, “I did my thing and at each front, I gained. I never studied what was happening. I was in my race and didn’t study the rest. The start was fantastic under gennaker for two days like in the manuals. It was wild after that with huge waves. Baghdad!  I was forced to slow the boat down when she reached 25 knots. For the last two days, I went into my world to do my race.”

He recalls he was up close behind the IMOCAs at times, “The fourth front, I said I would change my strategy and head south, rather than go with the others. The others made mistakes. That’s when I was enjoying myself. I hadn’t raced like that for a while so I was pleased that it worked out. The IMOCAs? I followed Justine and Isabelle. It was fantastic to be able to follow them.”

Richomme reflected, “I am nevertheless exhausted. I was at the end of my tether a few times but aboard all went well. I managed my sleep differently from in the past. It was hard to try to get any sleep. We have managed to deal with two projects at the same time. My sponsors followed me. Initially, it wasn’t planned like that, but now I’m ready to tackle the Imoca project. You can’t compare this with the Vendée Globe.”

Backed by French recycling group Paprec and banking group Credit Mutuel Arkea -who have united to form a sustainable, top-level long-term project – the team management hand-picked the outstanding Richomme to skipper their new IMOCA which is in build for the 2024 Vendée Globe and which will be launched early next year.

Richomme is one of the outstanding sailors and technicians of his generation. He is a double winner of La Solitaire du Figaro, winning in 2016 and again in 2019, the first year the Beneteau Figaro 3 was introduced to the race – when he left all of the French legends – like Jérémie Beyou, Michel Desjoyeaux, Yann Eliès, Armel Le Cléach and Loick Peyron – in his wake.

The Ocean Race, Yoann Richomme will be the skipper of Racing for the Planet
Add a comment