America's Cup1426 coppa america1249
The best sailors in the world will be flying above the water at speed when the America’s Cup World Series begins in the summer... 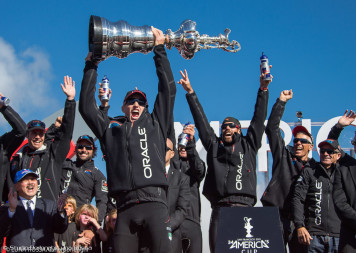 San Francisco – The best sailors in the world will be flying above the water at speed when the America’s Cup World Series begins in the summer of 2015.

Champion sailors Ben Ainslie, Dean Barker, Franck Cammas, Nathan Outteridge, Max Sirena and Jimmy Spithill will lead their respective teams into the first stage of the competition for the most storied trophy in international sport.

Commercial Commissioner Harvey Schiller says that he also expects at least one additional team will be joining as a late entry.

In a Regatta Memorandum issued to the teams today, Schiller confirmed two America’s Cup World Series events have already met the hosting criteria and had been scheduled to be raced in 2015 by the America’s Cup Event Authority.

Further events will be added to the America’s Cup World Series calendar as hosting agreements are concluded and subject to the unanimous consent of the teams.

“This is the first time in America’s Cup history that each of the teams has been given an opportunity to host America’s Cup World Series events,” Schiller said “All six teams are interested in hosting at least one event in either 2015 or 2016 and we’re working with each team to convert that interest into a concrete event plan.”

The two confirmed host venues will announce their events in the coming weeks with the first announcement expected on November 5th.

All racing in the America’s Cup World Series will take place in foiling versions of the one-design AC45 catamarans. A feasibility study has confirmed the necessary modifications can be made to all the boats prior to the first event in June 2015.

Powered by a highly efficient wing-sail, the foiling version of the AC45 catamaran will lift out of the water, riding on hydrofoils which reduces drag and increases speed.

“It will be a thrilling and spectacular sight to see these boats racing together in a fleet race format and it will be challenging for the five sailors on board,” Schiller said.

In December, the final host venue announcement will be made with Bermuda and San Diego the remaining candidates to host the 2017 America’s Cup.

“We’re moving forward on the host venue agreement,” Schiller said. “Bermuda and San Diego have now submitted their final bids and in each case we have a potential partner who has presented a compelling event plan. The benefits of that will accrue to each of the teams leading to a successful 35th America’s Cup.”

“It’s been a running start for me,” concluded Schiller, who has been in his role since late summer. “We have a lot of work to do between now and the end of the year. But all our teams have worked together, and we look forward to sharing additional positive news in the coming weeks.”