immola 602 sailing3991 transat jacques vabre78
Celebratory magnums of Moet champagne and potent local Caiprinhas were in evidence on the winners’ dock as Itajaí welcomed, in short order, the winners... 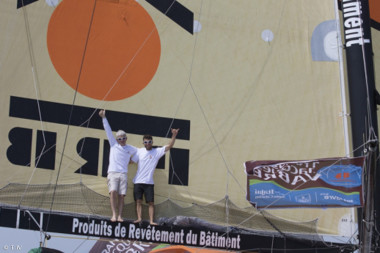 Itajai – Celebratory magnums of Moet champagne and potent local Caiprinhas were in evidence on the winners’ dock as Itajaí welcomed, in short order, the winners of the Multi 50 Class and the white hot IMOCA monohull class, but the key, respective skippers were also toasted for their own personal triple and double triumphs on the biennial Transat Jacques Vabre race, which retraces the coffee route from Le Havre to Brazil.

Multi 50 class winner Erwan Le Roux made it three Multi 50 wins, two back to back, when he and Italian co-skipper Giancarlo Pedote brought FenêtrêA-Prysmian across the finish line this morning in Brazil on boat he helped Franck Yves Escoffier build as Crépes Wahou in 2011. After sharing a maiden race victory with Escoffier in 2011 into Puerto Limon, Costa Rica, Le Roux won the last edition with Yann Eliès. He admitted back them that he had learned to up his intensity from three times Solitaire du Figaro winner Elies, but this win was as much about passing on his learning to his Italian co-skipper Giancarlo Pedote who today realised a dream of completing the Transat Jacques Vabre which he had harboured for 14 years, ever since standing on the dock as a preparateur.

A double, back to back, win was also completed by 2004-5 Vendée Globe winner Vincent Riou when he and Seb Col guided PRB across the finish line this afternoon with second placed Armel Le Cléac’h on Banque Populaire VIII, the last surviving new generation IMOCA still in the race, lying 60 or so miles behind in second. Although Riou and Col set a new IMOCA class reference time for the 5400 miles course 19 minutes and 23 seconds faster than in 2013. Riou revealed on the dock that they had sailed all of the course with no wind instruments, only Course over Ground and Speed over Ground outputs. Their enforced back to basics approach, sailing by feel and instinct, saw them sail 4.45% faster than in 2013 covering 4.35% more ground. As Riou bids for a second Vendée Globe win next year, his objective was to learn from America’s Cup helm and grand prix monohull ace Col.

Col noted: “Ultimately, this electronic damage is a good lesson. We realize that we are increasingly reliant on gizmos in life in general. As human beings we are capable of doing great things by instinct and feel. There is a nice lesson for a performance. And I learned how complete you need to be to sail an IMOCA.”

Riou and Col lead all the way in the Southern Hemisphere, executing their game plan to the letter. Their objective was to be in the leading posse at the Cape Verde islands. That they then wriggled free of the Doldrums with a tiny lead was just enough for them to extend in the S’ly trade winds. And after having to retire consecutively from both the Vendée Globe and last year’s Route du Rhum, Riou will take some considerable confidence in arriving in such good shape in Itajai, winning the IMOCA fleet in a pre-Vendée Globe year from a race which imposed a high rate of attrition, 11 boats of the 20 starters retiring during a brutal first seven days of racing.

Vincent Riou: “We made a very special race. We worked this Transat Jacques Vabre by feel. From the first night race we had a navigation system failure. After that we did everything with one single display, COG and SOG. We never had wind strength or direction. We even thought of putting ribbons in the rigging as we did when we were sailed our 420 dinghies as nippers. We did everything without electronic help. But if you had told me before the start we would do this, I would have said not a chance. It’s not possible. But we had to sharpen up our senses and make it work. Then with some simple benchmarks, it’s not too hard to find the right settings. But you always want to be well pressed for the best feelings. But for us the lesson is that you can learn from the feelings and it’s not so bad.”