moth46 moth world championship8 rob greenhalgh2 sailing3991
A rare October appearance of unstable weather conditions has sent shockwaves through the fleet on the eve of the 2013 McDougall + Maconaghy Moth... 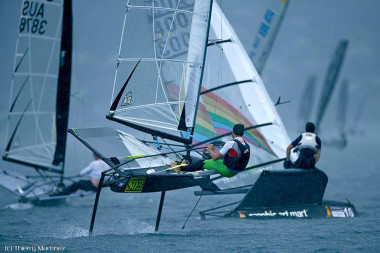 Kaneohe Bay – A rare October appearance of unstable weather conditions has sent shockwaves through the fleet on the eve of the 2013 McDougall + Maconaghy Moth World Championship, where 80 of the world’s fastest dinghy sailors from 15 nations are making final preparations for the prestigious event. Renowned sailing meteorologist Chris Bedford believes they may have some spare time ahead. “An upper low continues to move away from the Hawaiian Islands, but the associated upper trough and high cloud remains over the islands,” Bedford said. The trough will keep the subtropical ridge to the North weak, and he expects the usually reliable trade winds to remain sluggish “at least through midweek, and possibly through the end of the week.”

Dozens of sailors spent Sunday cutting, shaping, sanding, polishing, and otherwise modifying their boats’ foils — the underwater fins that allow the 11-foot Moth to fly above the waves and reach speeds unheard of just a few years ago — to optimize them for the expected light winds.

Britain’s Rob Greenhalgh drew first blood on the course, taking the easy victory in Sunday’s single practice race. Greenhalgh was unaffected by superstition as he blazed to victory on a squally, shifty Kaneohe Bay, Hawaii. Being a superstitious lot, most sailors will avoid winning the practice race before a major event, but Greenhalgh believes the opposite. “I took the practice race at the last Worlds [in the International 14 Class] I won, so I’m fine with this one,” said the dinghy, skiff, and Volvo Ocean Race veteran.

Greenhalgh and a small number of British sailors have shown strong light-air performance, adding to the spirited international rivalries on display here in Hawaii. “There are strong groups from Australia, New Zealand, The UK, the US, and Italy,” said California’s Zach Maxam. “It’s all in good fun, but there’s some real national pride here and it definitely adds excitement to the racing.”

Detroit’s Bora Gulari was crowned US National Champion here over the weekend with a strong win in the 75-boat fleet during last weekend’s regatta, but he says conditions will require ‘a little bit of everything’ to take the 2013 World Title. “It looks like we’ll have some light wind, some medium wind, and possibly a little strong breeze,” said Gulari, the last man to win a World Championship on US soil, in the Columbia River Gorge in 2009. “The very light guys may have a small advantage at times, but whoever can adapt the best to the widely varied conditions here will probably take home the World Championship trophy,” Gulari said.

Simon Payne says it may take even more. “Extreme could be the new normal here in Hawaii,” said the 2010 and 2006 Moth World Champion. “If the forecast proves true, the boys that can get to the ends of the start line to avoid the hole in the middle may find themselves looking very strong at the top mark, and those that can come up with the best foils for the conditions may see some advantage as well.” Payne has stepped away from competition this year to focus on his family, though he continues to contribute to the Moth fleet as coach and scribe. Read his humorous and insightful breakdown of the Moth Worlds fleet here.

You can find names, sail numbers, and origin for each competitor here.